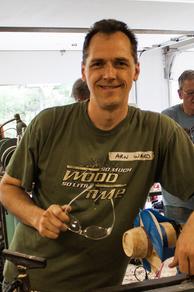 I have yearned throughout my adult life to work with wood, especially at the lathe. As a youth, I watched my grandfather make such wonderful items: beds, stools, coffee tables, benches and all sorts of oddities. I have always wanted to do what he did. In high school, my advanced woodworking project was a turned chess set. I scraped away at the chess pieces using dull tools and horrible technique (mostly because my teachers had no clue and didn't really teach much anyway).

As an adult, years went by before I had a place with a basement and was able to start my new hobby of woodworking. However, as soon as I bought a lathe, all my other woodworking ambitions fell aside. I fell in love with the machine and absorbed all the information that I could find, and still do. I feel that a person should never quit learning and keep pushing to out-do themselves. With every project I work on, I think up a dozen more that I want to try if only there were more time! But, we all have that problem, don't we?

As an artist and observer, I am attracted to art that moves, or has the feeling of movement. I suspect this is a direct result of years of being a juggler. As a result of watching hundreds of performances and seeing the many manipulations and balances that are both technically complex and mesmerizing, I like to imitate those same traits in my artwork. I enjoy pieces that provoke both a "Wow" effect, and are just plain fun. A successful piece will make a person smile, if either because of its humor or their own amazement.

•International Jugglers Association (IJA) - I have many old friends from this group, and many fond memories.

•American Association of Woodturners (AAW) - An amazingly open organization devoted to promoting woodturning as an art and craft. •Ohio Valley Woodturners Guild (OVWG) - I owe my talents to many of the members of this group, and the incredible demonstrators they bring in. They have shortened my learning curve dramatically and allowed me to achieve far beyond my wildest earlier ambitions. I spend a lot of time doing volunteer work for this organization to help promote this wonderful activity.